The Roux en-Y gastric bypass (RYGB) is a hybrid procedure considered by many to be the mainstay gold standard bariatric operation with which all other procedures are compared with. In various forms, it has been performed for close to half a century and is the most studied in the scientific literature. The procedure is typically performed laparoscopically. It involves the creation of a small gastric pouch and the rerouting of part of the small intestine — through to a much lesser degree than with the duodenal switch (DS). Therefore, there are fewer metabolic side effects and lower complication profiles. It is similar to the DS, however, in that resolution of medical comorbidities, especially diabetes, is independent of weight loss and relates to changes in the hormonal milieu resulting from the intestinal bypass component. There are some differences in the manner various surgeons perform a standard RYGB.  These relate to technical nuances of pouch creation, anastomoses (hook-ups), and/or minor alterations to intestinal limb lengths. Named subtypes do exist, but these are fundamentally similar to a regular RYGB. 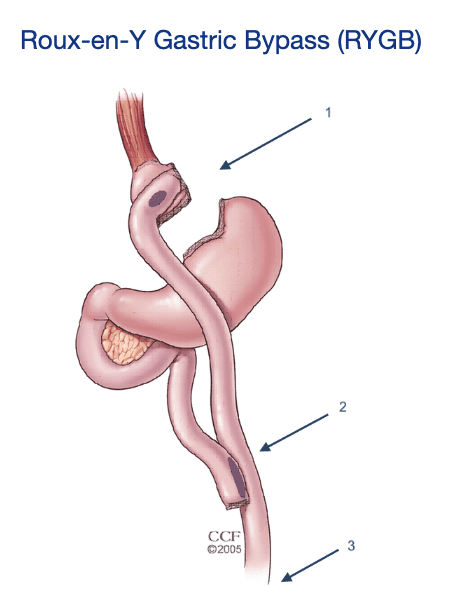 The gastric bypass works in several ways. Like many bariatric procedures, the newly created stomach pouch is smaller and able to hold less food, which means fewer calories are ingested. Additionally, the food does not come into contact with the first portion of the small bowel and this results in decreased absorption. Most importantly, the modification of the food course through the gastrointestinal tract has a profound effect to decrease hunger, increasing fullness, and allowing the body to reach and maintain a healthy weight. The impact on hormones and metabolic health often results in the improvement of adult-onset diabetes even before any weight loss occurs. The operation also helps patients with reflux (heartburn) and often the symptoms quickly improve. Along with making appropriate food choices, patients must avoid tobacco products and non-steroidal anti-inflammatory drugs (NSAIDs) such as ibuprofen and naproxen on a lifetime basis.

To get more information, We recommend that you watch our free online bariatric surgery seminar, as well as  the relevant modules on EMMI, a patient education program. www.my-emmi.com/SelfReg/UNIVERSITYBARIATRICS

See below to watch an animated video of a gastric bypass.