Adjustable bands have a near 100% lifetime re-operation rate. The revisional surgeries can include placement of another band, simultaneous or staggered conversion to a stapled procedure or a simple explanation without additional surgeries. There are pros and cons to each choice.

Laparoscopic removal of adjustable gastric bands is offered through University Bariatrics. The number of these cases is expected to rise dramatically in the near future. Not accounting for the more common problems such as slippage and port/tubing malfunction, other factors lead to gastric band explantations as well. They include erosion, mega-esophagus, foreign body reaction, general intolerance, and inadequate weight loss among others. 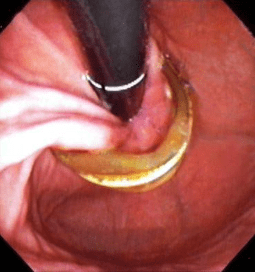 Lap Band removal can be performed as a single-stage procedure concomitant with another weight-loss operation. Alternatively, a two-stage approach may be undertaken that allows for local tissue healing and after ensuring full resolution of band-related symptoms or complications prior to adding yet another bariatric procedure.

Eroded gastric band explantation, however, carries a much higher risk profile and in our opinion, should only be done as a stand-alone operation. The University Bariatrics team has extensive experience with these operations and was the first to report & publish the laparoscopic transgastric technique for the removal of eroded bands.

We look forward to the opportunity to discuss all of your band removal options with you so that you can decide on the best course of action for yourself. It is only a matter of time before your band’s explantation becomes necessary and in our opinion, if it is not being actively used and managed, it needs to come out sooner than later.